Production of the Winchester Model 70 started in 1935. It has gone through many changes over the years, but is currently still in production today.

The following information is critical MUST HAVE knowledge when ordering parts or wood for your Winchester Model 70.

When was your Model 70 produced?

Production Type by Year of Manufacturer:

While dating your Model 70 by serial number can be difficult, and there are many "legends" about why the historic serial number records for Winchester rifles and shotguns are not complete or why they are not always verifiable. A few reasons cited are:

There is probably some kernel of truth to all of them. But the fact remains; there is no original, single, totally accurate database of serial numbers from 1866 forward that we are aware of. But perhaps this page can help you somewhat in your research.

Records for rifles produced after 1992 have not been released. However you can call Winchester Firearms directly to inquire about the date of production on your rifle. Winchester can be reached directly at 800-333-3288.

Using the information above you should be able to determine when your Model 70 was produced. And as such follow the chart below for part availability.

What bolt style do I have? 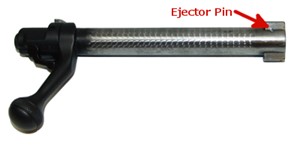 The PUSH FEED BOLT will have a small extractor and an ejector built into the bolt face as seen in figure 2. And as shown in Figure 1 a retaining pin for the ejector is visible from the outside. Also shown in figure 2 is that a push feed bolt has a completely inletted bolt face. 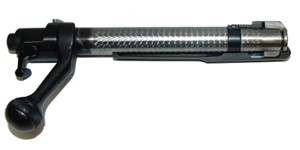 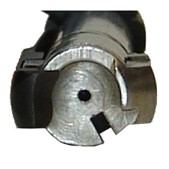 The CONTROL ROUND FEED BOLT will have a long "Claw" type extractor (see figure 3) and is often referred to as a pre'64 style bolt. However the USRAC parts do not interchange with the pre'64 manufactured rifles. While the extractor is the most common way to identify this bolt style you can also look at the bolt face (figure 4) and see that it does not have a small extractor, and does not include an ejector. 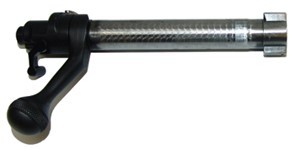 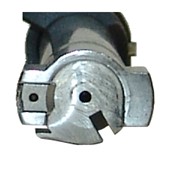 The CONTROL ROUND PUSH FEED BOLT is a combination of the previous two types of bolts. As seen in figure 5 there is not a long "claw" extractor. And in figure 6 you can see that the bolt uses the small style extractor, but the bolt face is not completely inletted.

What floor plate assembly do I need/have?

Winchester produced 3 different types of Trigger Guard / Floor Plate Assemblies. The 1 piece, the 2 piece, and the DBM (detachable box magazine) versions. These are each in addition to having a blind magazine, which requires nothing accept a trigger guard. And each Model 70 stock requires the use of a specific floor plate assembly. To determine which floor plate assembly you may have, or to see which assembly you may need use the figures below.

The DBM or Detachable Box Magazine is only for use with the DBM magazines which you can view and purchase HERE. This is easily identified, by a lack of floor plate, and a magazine release. This assembly also only take two screws, and has a much more squared bracket where the floor plate hinge would normally be.

What type of action is my rifle?

For our purposes, we will be discussing the USRAC production and later actions. These came in 3 basic types, and the depending upon the barrel you could then change the basic designation to a more specific type (i.e. long action verse long action magnum). While both use the same action, the magnum will have a different contour barrel and require a wider channel in the stock.

The 3 basic types of actions are Super Short Action, Short Action, and Long Action. And outside of a few custom builds and specialty rifles, all your Model 70's made after 1964 should follow these rules. Use the Table and Figure below to determine your Winchester Model 70 action.